Fat and purring, he lies in the sunbeam. His pure white underbelly billows and slivers of pink flesh peek through the fur.  His eyes, mere slits, bear the heavy satisfied look of one who recently tossed back a few shots of tequila, polished off a Porterhouse dripping with grease and butter, then finished the meal by lapping up a bowl of heavy cream.

Tomorrow has no meaning for this cat and yesterday doesn’t ring a bell.  This moment and maybe the next are enough.  This particular beam of sunlight and the faint taste of a meal lingering on the back of his tongue consume every part of his attention.

Being near such complete satisfaction is remarkably satisfying.  I am content to sit and observe this feline Buddha, noting changes of breath and thrilling to tiny movements as if every lazy stretch of the paw brings this cat (and his audience) one heartbeat closer to Nirvana. It is performance art and I don’t want it to end. 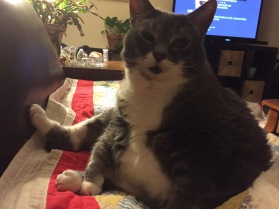 The world changes when I move my hand and the curtain collapses on this one-cat show.  Self-satisfied lizard eyes snap open and flash arrogant yellow once again, demanding to know my intentions. In no uncertain terms he communicates his disappointment in my inability to grasp the principles of the universe and I understand that at this exact moment it has occurred to him that I may be unworthy.

I attempt to placate this fake-Buddha by scratching his chin to remind him that he, too, appreciates a good scratching.  He’s not buying it.  You just don’t get it, he says. With enormous dignity, he heaves his corporal frame to the floor and stalks out of the room, his twitching tail giving me a piece of his mind.

He’s going to check out his food dish.  I know this and he knows this, but we have to pretend his superiority.